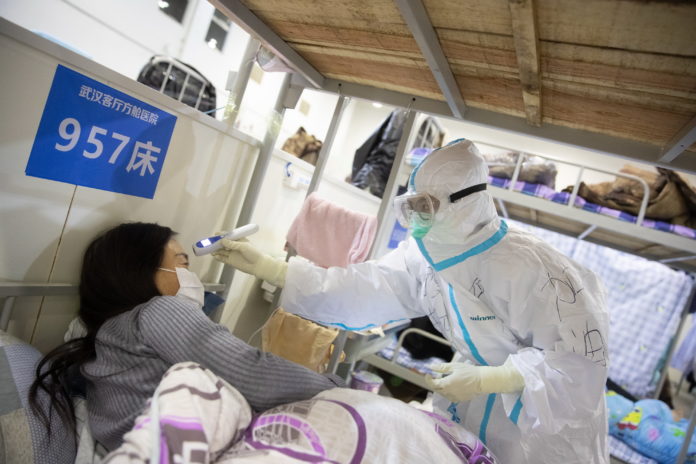 Brand “People’s Republic of China” is wobbling, as if the massive picture of Mao Zedong in Tiananmen Square was swaying with an earthquake tremor. But it can only actually fall if pushed from inside.

The handling of the coronavirus epidemic is undoubtedly sapping confidence in the Communist party and its formerly all-conquering general secretary, Xi Jinping.

Any country or ruling party would struggle if faced with a similarly massive challenge – exacerbated by the great annual domestic migration for Lunar New Year.

But the party and its leader shoulder especially great ambitions of entering a “new era” created by Xi to “realise the Chinese Dream of national rejuvenation.”

National elders selected Xi as leader in 2012 to purge corruption and purify the party. He has replaced most senior officials, including in the People’s Liberation Army, with those who supported his rise through the provincial ranks in Fujian and Zhejiang.

Xi has restructured the party, personalised and centralised power. Leveraging the anti-corruption campaign, he has also built the central party’s vast surveillance and control powers.

Losing the ‘mandate of heaven’

The big question now is how this renovated party structure is holding up against the appalling coronavirus epidemic. Particularly as it compounds an economic slowdown already exacerbated by the trade-and-tech war with the US and Beijing’s struggles to subdue its troubled borderlands in Xinjiang and Hong Kong.

It would seem logical that since Xi claims all the glory for China’s economic rise and global influence, he would bear the responsibility for disasters, as well.

This would fit with the old imperial danger of losing the “mandate of heaven” – the notion that only a righteous ruler would retain the approval of the gods.

But there’s a long history in China of people blaming local officials for problems, while retaining a belief in the power of the emperor or general secretary to resolve them. Hundreds of thousands still annually petition the central party leadership about regional and personal wrongs.

Many are still assessing where to pin blame for the current crisis and are reluctant to accept what they are told officially. People are adroitly downloading and re-posting censored messages on social media, causing the “net police” constant whack-a-mole grief.

Read more: The coronavirus and Chinese social media: finger-pointing in the post-truth era

This is why the initial failings of the Wuhan authorities, which likely enabled the virus to spread rapidly, have aroused widespread anger in China. And why many rightly dubbed the whistleblowing doctor Li Wenliang, who died from the disease after being hauled in by police, a martyr.

In recent days, the central government has also blamed local authorities, replacing the party secretary in Hubei province. However, public anger and distrust of the authorities still burns.

Crises like the melamine-laced milk powder scandal that sickened more than 300,000 babies in 2008 and now coronavirus underline a basic reality: for all the vast sums spent on security in China, it remains fundamentally elusive for most people.

Alistair Nicholas, a Sydney-based business consultant with extensive China experience, told me his contacts in China have said

the poor initial handling of the crisis by the Chinese authorities has ‘left a bitter taste in the mouths of many Chinese.’ Trust with their own government has been broken and those who can will leave.

With hundreds of millions still staying largely at home, staring at smartphones, such sentiments seep out everywhere.

Xi will, of course, be aware it was in Wuchang, a district of Wuhan, where a rebellion began in 1911 that triggered the downfall of the Qing Dynasty.

Today, however, the extent of China’s online and offline controls almost rule out change – or even threat – coming from the “masses”.

They are not trusted to participate in their own governance. They are given no scope to organise. Since seizing power in 1949, the party has drawn a line under further revolutions.

In the last few days, two figures named Xu have challenged Xi, and suffered the consequences.

Xu Zhiyong, a civil rights activist and academic who called on Xi to resign over the virus response, has been arrested by security officials in Guangzhou.

And Xu Zhangrun, a famous law professor at Tsinghua University, has been placed under effective house arrest after posting a lengthy critique that said China’s political system

turns every natural disaster into an even greater man-made catastrophe.

There has also been sharp criticism of China’s response to the crisis overseas, but this, too, carries limited weight in Beijing.

Instead, China highlights and relishes the applause its governance receives, especially from agencies like the World Health Organisation. WHO Director-General Tedros Ghebreyesus recently thanked China for its “transparency” and heaped particular praise on Xi for his “detailed knowledge of the outbreak”.

There are, of course, questions about when Xi’s knowledge of the outbreak actually began.

But rather than claiming ignorance of the severity of the outbreak at the outset, Xi has decided to take a different course. He’s persisting with his customary claim of omniscience and blaming local officials, while insisting China’s “war” against the virus has been valiant, as attested by the WHO and other international voices.

Who is going to take credible issue with that?

In today’s China, it is not intellectuals or the general public, but the 90 million party members who will determine whether this epidemic demands substantial change.

And that will ultimately depend on the tiny circle of elite cadres surrounding Xi. Unless a convincing crack appears at the top, the crucial band of middle-ranking party managers will sit tight.

‘Not just a problem for China, but for the world’

The personalisation of the system, combined with Xi’s reluctance to groom a successor is, however, steadily raising party anxiety about the future.

the long-term sound fundamentals of our economy haven’t changed … The impact of the outbreak will only be short-term.

But the rippling effects of coronavirus threaten to derail Xi’s vision of “rejuvenation” – a Chinese century of power and affluence. Economists ponder whether China will now spring the “middle income trap” that has restrained the prosperity of other nations, risking a failure to “get rich before it grows old.”

The almost certain postponement of next month’s National People’s Congress is a further mark of a government in crisis. Despite making good health sense, this move would create political risk by acknowledging that even pillar state events are now eluding Xi’s control.

Once eventually summoned, though, the NPC delegates will be expected to cheer to the red rafters Xi’s victory in the “People’s War” against coronavirus.

But what does it mean, asks Jude Blanchette, who holds the Freeman Chair in China Studies at the Centre for Strategic and International Studies, for Xi to dominate a party and government

that appear unable to confront, diagnose, and effectively overcome complex domestic and international challenges? That’s not just a problem for China, but for the world.

Or as the stood-down law professor Xu Zhangrun asks, can a regime that cannot treat its own people well, treat the world well?

– ref. How vulnerable is Xi Jinping over coronavirus? In today’s China, there are few to hold him to account – https://theconversation.com/how-vulnerable-is-xi-jinping-over-coronavirus-in-todays-china-there-are-few-to-hold-him-to-account-131760