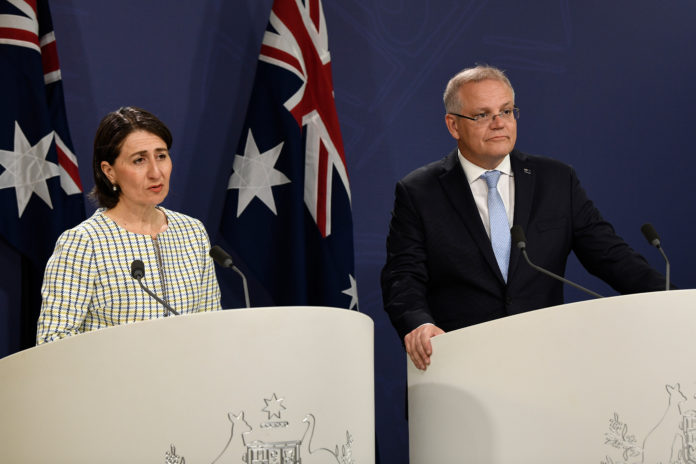 The recent federal government response to the bushfire crisis and the “sports rorts” affair are symptomatic of a deeper political malaise – role confusion.

Since the roles and responsibilities of the federal government have become untethered from Australia’s Constitution through a range of High Court decisions, there are no principles to guide what is a meaningful role for the Commonwealth. This means it dips into areas that are the responsibility of the states.

Funding local sports clubs, for example, replicates existing state and local government programs. But it has become a key campaign tool for the federal Coalition government to be “seen” to be relevant to issues affecting local communities.

The Natural Disaster Relief and Recovery Arrangements (NDRAA) have given Australia a framework for a world-class response to natural disasters. With four categories of assistance, the federal government provides funding for relief and recovery. This summer, after being accused of being to slow to respond, the Commonwealth is forging a new role for itself by deploying the Australian Defence Force. Again, it wants to be “seen” to be responsive.

This role instability means the federal government campaigns on issues under the jurisdictional control of the states and territories. When the prime minister changes, so do the areas of the federal government’s interest. The Commonwealth’s approach to managing the relationship with the states and territories is unstable and can veer from the cooperative to the coercive, from benign neglect to micro-managing program outcomes.

The culture of the federal government stands for the political culture in Australia. This is underpinned through most political commentary being generated by journalists based in Parliament House in Canberra. They promote a world view forged by constant interaction with federal ministers and senior bureaucrats.

Yet the political culture in Canberra is not the same as the political culture within state governments. While the federal government can cherry-pick when and what issues to become involved in, the states keep all the big service-delivery systems in Australia ticking over. They keep building hospitals, managing law and order, educating children, building and operating infrastructure and managing population and natural resources.

There are a number of reasons why state governments have created a more effective platform to deliver on their responsibilities.

The past couple of decades has seen the rise of managerialist, non-ideological and pragmatic premiers. These leaders have become more sophisticated in how they approach issues. They are genuinely responsive to the community through mechanisms like community cabinets held regularly in regional towns and ministerial consultative and advisory committees.

State leaders are comfortable with and have initiated accountability regimes (still lacking federally) and have become experienced crisis managers who are willing to lead in such a situation. Because service delivery requires them to be less ideological and more pragmatic, they are not riven by the kind of ideological fervour that prevents the federal government from acting on issues such as climate change.

Finally, with Queensland adopting fixed four-year parliamentary terms, the federal government is now the only jurisdiction with an erratic election timetable called by the prime minister for political advantage. Four-year terms allow for the business of government to progress in an orderly manner and through the parliament. It brings a steadiness and certainty missing from the more febrile arrangements in place federally.

The states bring stability and ballast to our federation. Since commissioning the original Garnaut report in 2007 they have acted to address the challenge of climate change. They have implemented mitigation and adaptation policies. They do this because they are vulnerable to the impacts of climate change such as extended droughts, coastal erosion, inundation and natural disasters. All have the target of zero emissions by 2050.

While the federal government struggles to find a meaningful role for itself in the 21st century, there is greater scope to harness the stability the states provide. A collective agreement between the states on emission targets is a good starting point. If all states and territories agreed on an approach, Australia would have a national plan without the need for federal government involvement.

As we enter another week of parliamentary theatrics, perhaps the time has come to turn to the workhorse of the federation for action on climate change – the states.