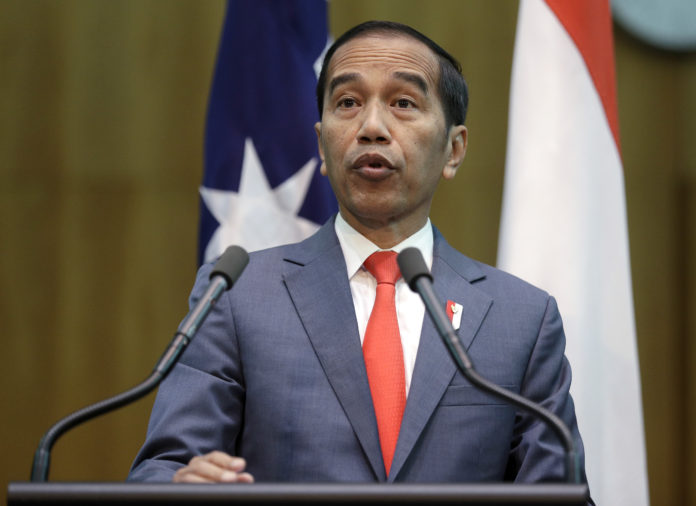 Indonesian President Joko Widodo – Jokowi – has shown himself to be generally less interested in international affairs than his predecessor, Susilo Bambang Yudhoyono (SBY). He has also been less committed to the Indonesia-Australia relationship.

Nonetheless, Australia’s invitation to Jokowi to address the parliament, and his acceptance of that invitation, suggests that the bilateral relationship is strong, at least at the governmental level.

Both Morrison and Jokowi referred in their parliamentary addresses to the fact that this year marks the 70th anniversary of the establishment of diplomatic relations between Australia and Indonesia. Morrison reflected backwards, noting that Australia had been an early supporter of Indonesian independence, and had been chosen by Indonesia to represent its interests on a UN committee involved with the Indonesia-Dutch dispute then underway.

Jokowi chose to look forward, to 2050 and the 100th anniversary of the start of diplomatic relations. He identified four major steps he suggested the two countries should take together to strengthen their bilateral relationship, and to contribute to regional peace and security.

Two of these steps were fairly predictable recitations of established policy.

The first was cooperation in furthering democracy, respect for human rights, counter-terrorism and anti-radicalisation strategies. He spoke against identity politics, disputing the idea that it was cultural clashes that divided the world. Implementation of these principles remains fraught with difficulties, but the parameters of the problems are well-known in Jakarta and Canberra.

Second, Jokowi argued for free and fair trade, both bilaterally and regionally, in the face of increasing protectionism. Here he welcomed the conclusion of the Indonesia Australia Comprehensive Economic Partnership Agreement, which he described as opening opportunities for economic growth in both countries.

Read more: It’s more than a free trade agreement. But what exactly have Australia and Indonesia signed?

But there were two other steps Jokowi wanted the two countries to take, which were perhaps different from what might have been expected.

Jokowi did not explain what he had in mind with joint action to lower carbon emissions, or managing climate change. Indonesia is a major exporter of coal, and annual forest fires have substantially reduced forest cover. Its political and business leaders are even more divided than those in Australia on climate-related issues and how to deal with them.

What Australia and Indonesia seem to share, it might cynically be suggested, is internal disagreement over the nature of the problem being faced, and steps that might be taken to address it.

Second, Jokowi called for Australia and Indonesia to be “anchors for development programs” in the Pacific region.

Like Australia, Indonesia has recently been paying increased attention to the nations of the South Pacific. Last October, it established the Indonesian Agency for International Development, with a focus on the South Pacific. Speaking at the launch of the agency, Indonesian Foreign Minister Retno Marsudi noted that assistance had already been provided to Tuvalu, Nauru, Solomon Islands, Kiribati and Fiji, as well as Myanmar and the Philippines.

Australia’s renewed interest in the South Pacific is linked to the increased Chinese presence in the region. But Indonesia’s concern is less with China than with the status of its easternmost provinces of West Papua and Papua. The movement seeking the independence of this region from Indonesia has its greatest support in the south Pacific, particularly in Vanuatu, though support has also come from Tuvalu and the Marshall Islands.

Indonesia has formally denied that the establishment of the agency was aimed at countering international criticism of Indonesia’s position in Papua. But the suspicion that there is a link will be hard to shake off.

Australia’s formal position on the Papuan provinces is made clear in the 2006 Lombok Treaty, which committed each party to supporting the territorial integrity of the other, and not providing support to separatist movements. There is, though, considerable support for Papuan separatism in the Australian community, reflected in the parliament particularly by the Greens. The Greens’ new leader, Adam Bandt, is reported to have told Jokowi, after his address:

Thank you for your speech, thanks for your comments on climate change, now please get something done on West Papua.

There is nothing new in the dilemma facing the Australian government on Papua, but the increased Indonesian focus on the Pacific region could well provide more opportunities for the two countries to differ than to work together effectively.

Finally, Jokowi’s speech was notable for what he did not say.

There was no mention of China’s increasingly activist foreign and defence policy position, especially in the South China Sea. However, given that the issue was explicitly considered in the joint statement of the two leaders, the president may have deemed that sufficient.

The other significant omission was any mention of easing conditions for the issuing of visas to Indonesians to visit Australia. This had been widely discussed in Indonesia before the president left for Australia. Scott Morrison did commit to reviewing the visa situation, but Jokowi would be well advised not to hold his breath.