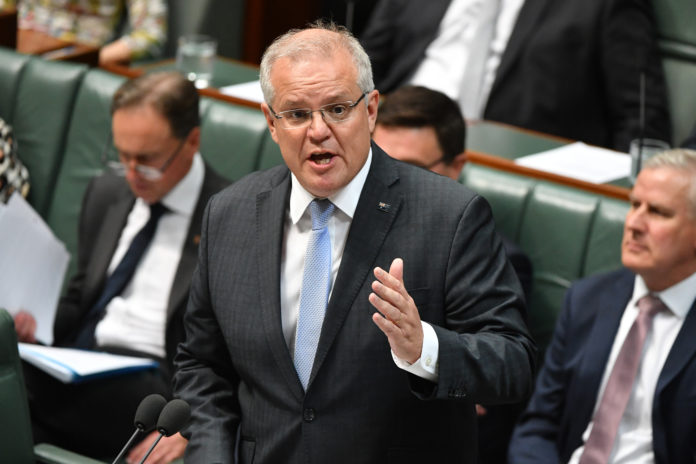 As he battles to put containment lines around the damage the Nationals’ meltdown is causing his government, Scott Morrison has given his party room a pointed lecture about unity.

He has also obtained a letter from Llew O’Brien in which O’Brien reaffirms he will support the government. O’Brien quit the Nationals this week and then won the deputy speakership thanks to the votes of several rebel Nationals.

O’Brien, who remains a member of the Queensland Liberal National Party, sent the letter after meeting Morrison on Monday night.

Before Tuesday’s Coalition meeting, the word was put out for members to show restraint, after recent public airings of differences over coal in particular.

Addressing the party room, Morrison reminded members they were there as a team, declaring the government had a “contract” with the Australian people.

Those walking into the government party room took on serious responsibilities and must do so as a government. The government had gone to the election highlighting local plans and the capabilities of local members but also very much as members of a team.

Read more: View from The Hill: It turned into a profitable day at the office for Nat rat

He said there were many parties in this government: the Liberal party, the National party, the CLP in the Northern Territory, the LNP in Queensland.

But “the contract we have with the Australian people” was to work collectively as their government. The government’s strength was its values, policies and beliefs, which were endorsed at the election.

Acknowledging the difficulties of the last couple of months Morrison told members, when they returned home after the current fortnight sitting, “to focus on the people who put us here”.

Treasurer and deputy Liberal leader Josh Frydenberg invoked John Howard’s adage about being a broad church, when Howard added, “you sometimes have to get the builders in to put in the extra pew on both sides of the aisle to make sure that everybody is accommodated”.

Frydenberg lamented Monday’s “historic moment” in the Australian-Indonesian relationship, with President Joko Widodo visiting Australia and addressing parliament, had been overshadowed in the news bulletins. He also urged MPs to focus on government achievements and policies and future plans “and put internal issues of recent days behind us”.

Embattled Nationals leader Michael McCormack, who at the weekend did the Tumbarumba trek which was started by Tim Fischer, said he’d had a call from Fischer’s widow Judy, who’d reflected on how Tim and his team had “stuck firm through difficult periods”. She had said Tim “would want us all to stand firm and together at present”, focused on continuing to deliver the government’s commitments.

O’Brien was present at the meeting but didn’t speak.

Also quiet were the Liberal moderates, who have been recently outspoken on climate change.

One of the Nationals rebels, former resources minister Matt Canavan, spruiked the advantages of the feasibility study for a Queensland coal-fired power station at Collinsvillle, but his comments were relatively non-combative.

Read more: VIDEO: Michelle Grattan on the Coalition and coal

In contrast, earlier Canavan prodded the southern Liberals when on Monday night he hit back with heavy sarcasm against former prime minister Malcolm’s Turnbull’s comment that it was “nuts” to advocate government support to build a coal-fired power station.

Canavan told Sky, “Good luck to Malcolm, he’s welcome to have his views. In fact, I hope that Malcolm keeps expressing those views and that maybe come around the next election he can lead a convoy, let’s say, up to Collinsville, and have a rally up there, and campaign against the coal-fire power station.

“I think that would go down very well, to have Malcolm’s motorcade come up to North Queensland, and tell us all why we shouldn’t be using our own product which we export overseas to create jobs here.”

Asked in question time whether the government would be willing to indemnify a Collinsville coal-fired power station against carbon risk, Morrison said it was committed to the feasibility study but “the matter that the member has raised with me in this question is not currently before the government”.

– ref. Behave as a team, Morrison tells the troops – https://theconversation.com/behave-as-a-team-morrison-tells-the-troops-131143