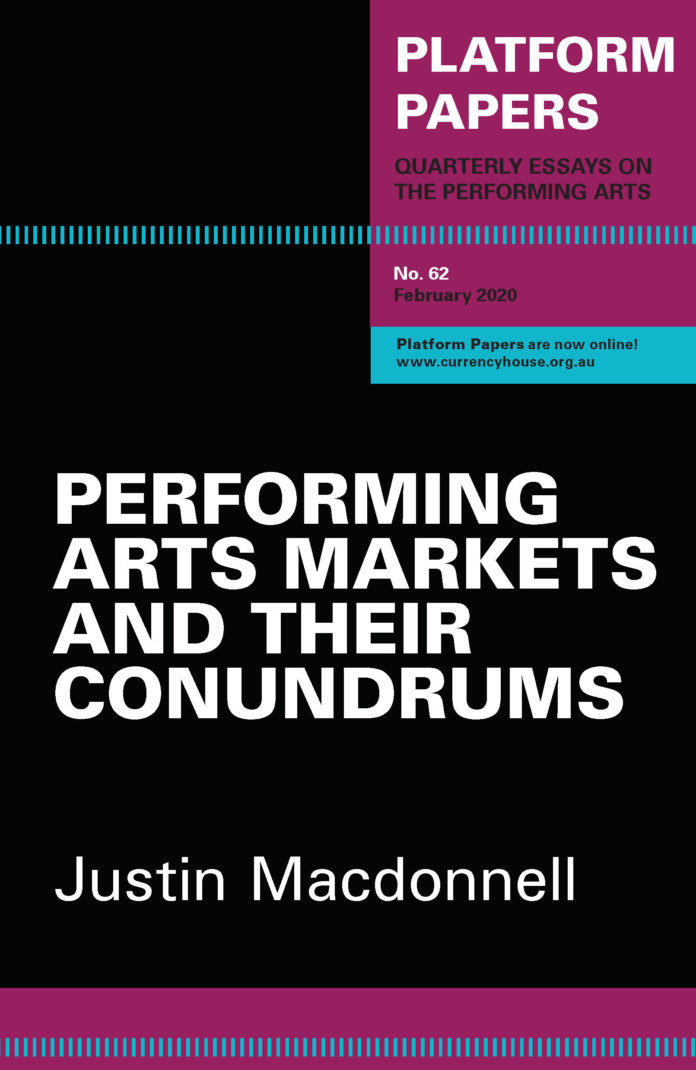 The performing arts may be a public good that serve to enrich Australia’s cultural imagination, but they are also a product competing for audience share and government, corporate and private support.

Established in 1994, the Australian Performing Arts Market (APAM) has aimed to facilitate one aspect of this “arts market” by hosting biennial trade fairs that connect national and international producers and programming venues.

From 2020, APAM will move from hosting these biennial conferences to “gatherings”, dividing its promotional activity across existing arts events such as Darwin Festival and Melbourne’s AsiaTOPA.

In light of this, APAM’s future is the subject of the latest Platform Paper from Currency House: Performing Arts Markets and their Conundrums.

Author Justin Macdonnell brings a commanding insider’s perspective to the topic. He has worked in and around touring arts companies for several decades, and is currently executive director of arts industry advocacy organisation Anzarts.

Noting APAM’s new model might lessen the intensity and impact of its work – especially given that overseas producers are unlikely to make multiple excursions to Australia a year – Macdonell asks whether the arts fair has outlived its usefulness.

This might seem at best an issue of marginal concern to people who work outside the performing arts industry. However, Macdonell argues the current system has led not so much to “good art” but “convenient art” being promoted to Australian audiences.

Given the significant role that public funding and public bodies such as the Australia Council play in supporting the performing arts and arts venues, his question deserves wider attention.

Frustratingly (but, no doubt, diplomatically), Macdonnell does not offer concrete examples of “convenient art”. He nevertheless argues that the “dominating presence of state and federal agencies” in the Australian arts market has led to the stifling of independent arts managers and small-scale producers, and also of innovative and risky projects.

It is time we asked, he suggests, whether an arts fair is necessary, let alone desirable, in today’s digitally empowered, globalised marketplace.

Macdonnell notes trade fairs are at odds with calls to curb air travel due to its environmental impact.

Read more: Sustainable shopping: is it possible to fly sustainably?

He also wonders if touring itself is so desirable or necessary in the age of YouTube and teleconferencing:

This is not to say that these means have replaced seeing a work or meeting the artist in person. In all probability, they never will. But they have revolutionalised access to knowledge of the work and are creating and maintaining contact about it.

In this digitally enabled market, companies and individual artists can also now bypass the traditional arts brokers and gatekeepers such as arts agencies, or indeed APAM itself, and promote themselves directly to producers.

APAM, he further observes, has “never has been the practitioner’s market”, rather it has “come to be about just one part of the industry (non-profit)”. Presenters and producers might attend to seek out new and innovative work, but they are not given a comprehensive overview of what might actually be available.

Although Macdonnell does not explore this, such institutionalised impediments to free choice may help explain the growing trend towards homogenisation in major arts programming across the developed world.

Artistic directors of major performing arts festivals, in particular, can appear impregnable to pitches from outside established promotional routes.

But if, as Macdonnell notes, “anyone, anywhere in the world at any time can now see the newest show on YouTube”, why would we seek to rely on the filter of agents or industry bodies to select what we will see or hear?

Read more: With culture on the free trade agenda, we must protect our own

The potential for market distortion under the current system can be made worse by horsetrading behind the scenes. The most powerful artist agencies routinely leverage access to their most profitable performers or productions to make hiring companies and venues take on other acts they represent, with little regard for local circumstances.

To my mind, the major buyers in the arts marketplace – artistic directors, festivals and venues – should be specifically resourced and encouraged to look for acts outside these existing industry networks.

Wesley Enoch’s provocative 2014 Platform Paper, Take Me To Your Leader, however, suggested we lack this kind of cultural leadership across the Australian performing arts:

With the growth of government-led cultural leadership we have seen the voices of the mob, the dissenters and the opposition slowly becoming tamed and included in a sort of official culture […] Government champions the arts more these days than artists do.

Enoch asked whether those who run subsidised organisations might be brave enough to bite the hand that feeds them.

But he has done a useful service to both the arts industry and the wider Australian public by asking us to consider whether there might be better ways for our major performing arts institutions to seek out, and promote, their wares.

– ref. What is the place of the performing arts fair in the age of the internet? – https://theconversation.com/what-is-the-place-of-the-performing-arts-fair-in-the-age-of-the-internet-130542