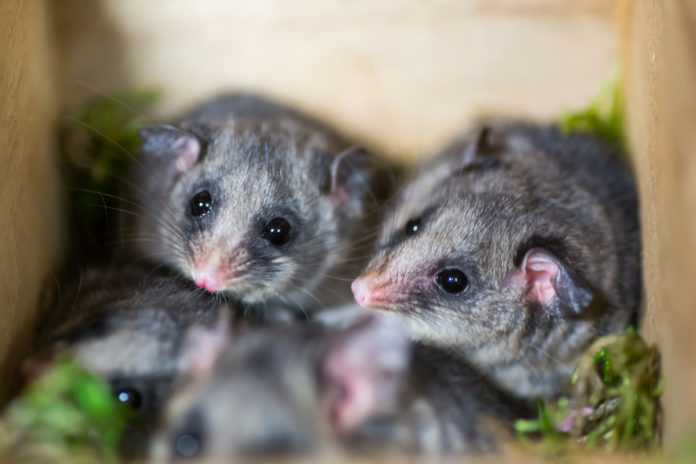 Australia’s recent bushfires have razed over ten million hectares, and killed at least a billion animals. It’s likely countless more will die in the aftermath, as many species face starvation as the landscape slowly regenerates.

Even before the bushfires hit, we were working on supplementary food to help recover the critically endangered mountain pygmy-possum. They are seriously threatened by climate change, historic habitat destruction and more frequent intense fires.

Just months ago we landed on a recipe for Bogong Bikkies, nutritionally suitable baked biscuits that have the consistency of an ANZAC biscuit, taste a bit like a nutty gym protein bar and smell a little like Cheds crackers.

We never imagined our work would be needed so quickly – or urgently – but now our Bogong Bikkies are being deployed across the boulder fields of NSW, providing vital supplementary food to native species such as pygmy-possums, native bush rats and dusky antechinus.

Mountain pygmy-possums are the only Australian marsupial that hibernate every winter under snow, making it essential they build fat reserves before their long winter sleep. The main food source during their spring/summer breeding season is the migratory bogong moth.

However in 2017 and 2018 the billions of expected bogong moths largely failed to arrive, leaving many females underweight and unable to produce enough milk for their young. Due to a lack of food, 50-95% of females in monitored Victorian locations lost their entire litters.

Read more: You can help track 4 billion bogong moths with your smartphone – and save pygmy possums from extinction

In response, Zoos Victoria’s Healesville Sanctuary proposed creating a new supplementary food that could be used in the wild to support possums and their young until moth numbers recover.

Ten years ago, we analysed bogong moths to determine the fats, proteins, carbohydrates, vitamins and minerals required for a suitable breeding diet for possums in our captive breeding program.

While we have a successful diet for the possums in our care that includes nuts, insects, vegetables and a specially developed “bogong moth substitute”, the blend has the consistency of a soft caramel (or bogong moth abdomen) – not suitable for feeding in the wild. We needed a shelf-stable, long-lasting, nutritionally suitable food that could feed remote wild populations.

Throughout 2019, using our existing analyses of bogong moths, we worked with world experts in veterinary nutrition to develop Bogong Bikkies – nutritionally suitable baked biscuits for mountain pygmy-possums, and other species that live alongside them. We collaborated with Australian wildlife diet experts, Wombaroo, to have our new product commercially developed.

We then trialled the bikkies with the possums in our care at Healesville Sanctuary, so we could monitor whether the food was palatable or caused any health issues. It was a huge success. The possums liked the food, but happily ate other food too. This was exactly what we wanted: something that was completely safe and would be readily accepted, but not chosen over natural food sources.

Once satisfied our captive trials were a success, we had to find the best way to deliver food safely to possums in boulder fields in the wild. This meant buying or making 12 different feeder prototypes. Our local hardware store knew us all by name! We tested four feeders, most of which were designed and built on-site, and chose the most successful three for trials in the wild.

Working with Parks Victoria and the Victorian Mountain Pygmy-possum Recovery Team, we tested these three feeders at 20 stations deep in the Alpine National Park, monitored with remote infrared cameras.

Over the last few months, Zoos Victoria and Parks Victoria staff have been refilling feeders, changing camera batteries and analysing hundreds of thousands of images and videos. After months of work, watching wild mountain pygmy-possums, native bush rats and dusky antechinus visiting our feeders and eating the food was a triumph.

Halfway through our research, some of the worst bushfires ever seen in Australia left habitats destroyed and our precious wildlife dead or starving. Victoria mountain pygmy-possum populations have so far not been directly impacted by fires this season, but populations on northern Mount Kosciuszko, New South Wales, were hard hit.

While the habitat was destroyed, we hoped some possums had survived deep in the boulder fields, as they have with previous fires. But surviving the initial fire is no help, if their environment and food sources have been so devastated that they can’t gain enough weight to hibernate before winter’s snow.

Within days of the January fires, we had packaged up our most successful feeder type, examples of our cooked bikkies, our best recipe and 30kg of Bogong Bikkie mix, and rushed it urgently to our NSW partners.

Teams from the NSW government’s Saving Our Species and NSW National Parks and Wildlife Service have now built and deployed 62 feeders and water stations in six boulder fields, baked batches of bikkies and started emergency feeding.

We’re thankful to have the food developed and research ready to assist. It is important to note, though, that such supplementary feeding is very intensive, and only appropriate for native species facing emergency situations, such as catastrophic fires.

If these bushfires teach us nothing else, it is the value of preparation, hard work and early funding to develop a range of conservation tools.

While we should all hope for the best, we must plan for the worst.