Owing to a results reporting fiasco, virtually no results had been posted in Iowa on Tuesday AEDT, although the caucuses began at 12pm AEDT. The caucuses are managed by the state’s Democratic party, not by an electoral authority. This fiasco will mean more criticism of the caucus system, and further questioning of Iowa’s status in having the first contest of every presidential nomination cycle.

Results from 62% of precincts were finally published Wednesday morning AEDT. According to New York Times analyst Nate Cohn, the results from these precincts are representative of the state.

On these results, Pete Buttigieg leads Bernie Sanders by 27% to 25% on State Delegate Equivalents, the traditional measure that most of the media focused on. Elizabeth Warren has 18%, Joe Biden 16% and Amy Klobuchar 13%. This measure is the only measure that was reported at previous Iowa caucuses.

The discrepancy between the final popular vote and state delegates is explained by higher apportionment of state delegates where caucus attendance was relatively low. Buttigieg performed far better than Sanders in these regions, as this tweet from CNN analyst Harry Enten shows.

Turnout at these caucuses will be about the same as in 2016. In 2016, 172,000 participated in the Iowa Democratic caucuses, well down from the record 240,000 in 2008. In 2008, the Democrats had a charismatic candidate in Barack Obama. Relatively low turnout and Donald Trump’s improving ratings should be big concerns for the Democrats.

Trump won the Iowa Republican caucuses with 97% of the vote. This validates polls showing his approval ratings are very high with Republicans.

Although he performed poorly in Iowa, Biden still leads in the RealClearPolitics average of national polls with 27.0%, followed by Sanders at 23.7%, Warren 15.0%, Michael Bloomberg 8.3% and Buttigieg 6.5%.

The question is whether Iowa will have a large impact on these figures. The attention on the results reporting fiasco, and the close contest between Sanders and Buttigieg, could limit any Iowa bounce.

Buttigieg failed to obtain a national bounce in November after the highly regarded Selzer Iowa poll gave him a nine-point lead. As I wrote in the article after that poll, Buttigieg has problems with black voters.

The next contest is the February 11 New Hampshire primary. A primary is administered like a normal election, and a results reporting fiasco is far less likely. Polls in New Hampshire close by 12pm February 12 AEDT. Like Iowa, New Hampshire is almost all white.

Sanders is likely to win in New Hampshire. He has 25.6% in the RealClearPolitics average, followed by Biden at 17.9%, Warren 14.2% and Buttigieg 13.1%. Sanders will likely be assisted in New Hampshire by being the senator for the neighbouring Vermont.

After New Hampshire, we have the February 22 Nevada caucuses and the February 29 South Carolina primary. There have been few recent polls in either state. On “Super Tuesday”, March 3, 14 states vote and 34% of pledged delegates will be awarded. A key question is whether Biden’s support with black voters holds up.

After the dramatic fall in Scott Morrison’s ratings three weeks ago, there was little change in this week’s Newspoll. Labor led by 52-48, a one-point gain for Labor. Primary votes were 38% Coalition (down two), 35% Labor (down one), 13% Greens (up one) and 4% One Nation (steady).

37% were satisfied with Morrison’s performance, and 59% dissatisfied, for a net approval of -22, unchanged on the last poll. Anthony Albanese’s net approval was down six points to +3. Albanese led by 43-38 as better PM (43-39 in the last poll).

This Newspoll was conducted January 29 to February 1 from a sample of 1,510. All figures from The Poll Bludger.

Despite the bushfire crisis and the controversy regarding Bridget McKenzie’s grants for sports clubs, Labor leads by just 52-48 – hardly an irrecoverable position for the Coalition. In the first Newspoll after Malcolm Turnbull was ousted in August 2018, Labor led by 56-44, but lost the May 2019 election.

On Tuesday, Nationals leader and deputy PM Michael McCormack defeated Barnaby Joyce in a partyroom leadership vote. The margin of victory has not been revealed.

ALP’s climate policy too little, too late – we must run faster to win the race

Why do men kill their families? Here’s what the research says

ALP’s climate policy too little, too late – we must run...

Why do men kill their families? Here’s what the research says

The FODMAP diet is everywhere, but researchers warn it’s not for...

3 ways to help children think critically about the news 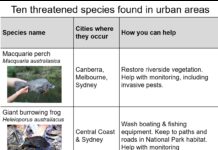 Want to help save wildlife after the fires? You can do...

ALP’s climate policy too little, too late – we must run...