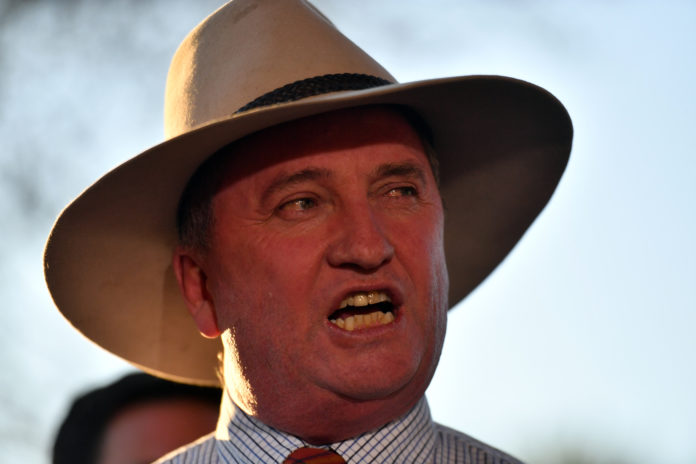 The Nationals have exploded into a major crisis with Resources Minister Matt Canavan offering his resignation from the ministry on Monday to throw his support behind Barnaby Joyce’s bid to oust Michael McCormack from the leadership.

In a Monday night news conference Canavan told reporters the Nationals needed “a bulldog”, “a fighter”.

Earlier Joyce informed McCormack he would challenge, with a spill to be moved when the party meets on Tuesday morning.

The Nationals’ meltdown has been triggered by the forced resignation of Bridget McKenzie from the cabinet and Nationals deputy leadership, after the secretary of the Prime Minister’s department, Phil Gaetjens, found she had breached ministerial standards by not declaring her membership of gun clubs in the sports rorts affair.

While only a new deputy needed to be elected, Joyce has seized the opportunity to make his leadership run. On Monday night the numbers were unclear in the McCormack-Joyce battle.

The leadership fight is driven by Joyce’s unrelenting desire to return to the job he had to forfeit in early 2018 amid a scandal around his personal life.

But it is fuelled by widespread criticism of McCormack, both inside and outside the Nationals, for a perceived lack of cut-through. This is despite the fact the Nationals held their ground at the 2019 election.

Read more: Barnaby Joyce: the story of an unlikely rise and a self-inflicted fall

Canavan made it clear a switch to Joyce would mean a more forthright stand on policy by the Nationals – by extension within the Coalition. This would make the relationship much more difficult for Scott Morrison. McCormack’s critics within the party accuse him of being too subservient to Morrison.

Most immediately, a change of leader would mean a new Coalition agreement, with the Nationals demanding extra concessions.

Joyce recently attracted attention with his “Merry Christmas” video, showing him feeding cattle, in which he gave his take on the climate issue.

“Now you don’t have to convince me that the climate’s not changing, it is changing – my problem’s always been whether you believe a new tax is going to change it back. I just don’t want the government any more in my life; I’m sick of the government being in my life.

“And the other thing is, I think, we’ve got to acknowledge … there’s a higher authority beyond our comprehension … right up there in the sky. Unless we understand that it’s got to be respected, then we’re just fools, and we’re going to get nailed.”

One issue for the Nationals is how a return to Joyce would be received by women in regional areas, among some of whom his reputation was tarnished by allegations of sexual harassment. The Guardian on Monday reported a number of rural women opposing his reinstatement.

Joyce on Monday said the National party had to be on the “balls of its toes as we face some of the most challenging times.

“We have to speak with our own voice and we have to drive agendas because it is going to be an incredibly tough game for people in regional areas,” he said.

“We’ve got to make sure that we are not a shadow of another party.”

“We struggle to get our voice heard … we just have to fight a bit harder,” he said.

“I do think that on a number of fronts we must be more forceful on issues that are threatening the livelihoods of those in regional Australia.”

“We need a bulldog, we need a fighter to fight back against those who want to take away people’s coal jobs, who want to shut down cane farms,” he said. Joyce was “an effective fighter” and “that’s why I’m backing him”.

“I do think a change in direction here will allow us to do that better.” Canavan is a passionate advocate for the coal industry.

In another complication over ministerial standards, Canavan revealed he had just recalled his link to the North Queensland Cowboys, which last year was awarded a $20 million loan by the Northern Australia Infrastructure Facility, that sits under his ministry.

He did not believe this was a conflict of interest, saying he did not approve NAIF loans. But a press release from him last year said “Canavan approves $20 million for NQ Cowboys”. Canavan admitted he should have declared the link and he has referred the matter to the Prime Minister’s office.

Queensland National Llew O’Brien flagged he would move for a spill when the 21-member Nationals party room meets.

David Littleproud, the Water Resources Minister, is the frontrunner for the deputy vacancy. He is not contesting the leadership. Frontbencher Darren Chester, a McCormack supporter, said he would not run for deputy.

Late Monday Canavan had not formally resigned from the cabinet: while offering his resignation to McCormack he has to tender it formally to Morrison, which he said he would do Tuesday morning.