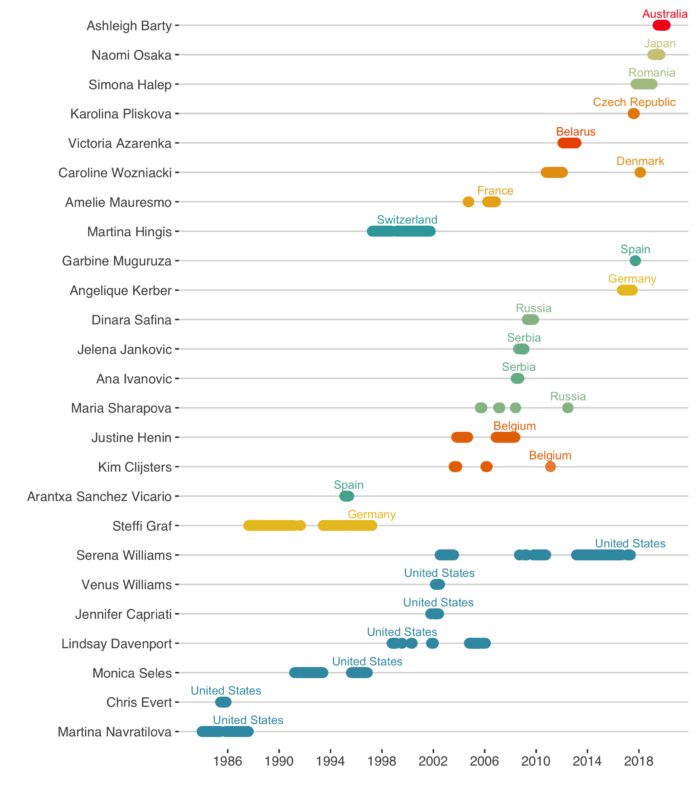 Australian tennis fans were obviously disappointed when Ash Barty lost in the Australian Open semifinals to Sofia Kenin, the young American who went on to win her first Grand Slam title on Saturday. After the early exits of Serena Williams and Naomi Osaka, Barty had been the oddsmakers’ favourite for the title.

In the race for Grand Slam titles in tennis, it can be easy to lose perspective on the broader impact of a player’s performance and how that can help grow the sport in individual countries around the world.

Research shows that when professional players rise to the top of the world rankings and dominate for long stretches, it often coincides with the broader development of tennis talent in their home countries.

This means Australian women’s tennis could be ripe for a boom in the coming years as younger players seek to emulate Barty’s success.

The magnitude of what Barty has achieved in the past year is simply remarkable, especially considering the talent at the top of the women’s game globally seems to get stronger with each year.

Barty was a dominant force during her breakout 2019 season. She won 57 of 70 matches and four titles, including her maiden Grand Slam title at the French Open and the WTA Finals in Shenzhen, China.

On top of that, she also reached No. 1 in the world, becoming the first Australian woman to achieve the feat since Evonne Goolagong 43 years ago. She will retain the No. 1 ranking after her semifinal showing at Australian Open with a huge point margin over No. 2 Karolina Pliskova.

In the past 35 years, there have been 25 women from 14 countries ranked No. 1. From 1985 to 2005, women’s tennis was dominated by the United States, with seven different American players rising to the top ranking. Belgium produced two No. 1s, while France, Germany, Spain, Russia and Switzerland each had one.

Since 2010, there have been 11 women from 11 countries who have earned the world No. 1 title (owing largely to the ups and downs of Williams’ career).

One impact of the recent wave of diversity at the top of women’s tennis is that, thanks to players like Barty, Osaka and Simona Halep of Romania, there are more role models than ever for aspiring tennis players around the world to look up to.

And history suggests this is a major driver for developing the game in smaller countries where tennis has not traditionally been a hugely popular sport (for example, Belgium and Serbia) and to inspire future generations of players in countries with deeper traditions (the US, Australia and other European countries).

How No. 1s have inspired other players globally

When we look at six nations outside of the US that had one or more No. 1 players between 1990 and 2010 (highlighted in yellow in the chart below), there are several encouraging trends.

First, for all six nations, we can see a surge in women’s players ranked in the top 150 that has either coincided with or followed within a few years of those countries having a top-ranked player.

Read more: Who can break up the ‘Big 3’ monopoly on men’s tennis? Here’s what the numbers say

For example, shortly after Kim Clijsters and Justine Henin became No. 1 in the early-to-mid-2000s, other Belgian players like Yanina Wickmayer and Kirsten Flipkens began to rise in the rankings.

Maria Sharapova’s time at No. 1 in the mid-to-late-2000s overlapped with strong seasons by Russian compatriots Elena Dementieva and Vera Zvonareva and, most notably, Dinara Safina, who also reached No. 1 herself in 2009.

Martina Hingis’ stellar career was also followed by other Swiss players, including current world No. 7 Belinda Bencic, who was not only inspired by Hingis, but was coached by her mother.

We can also see that two recent No. 1s, Angelique Kerber of Germany and Garbine Muguruza of Spain, earned their top rankings almost exactly 15 years from the last No. 1s from their home countries. Kerber followed in the footsteps of Steffi Graf, while Muguruza came after Arantxa Sanchez Vicario.

And in the US, many young African-American women’s players, including 15-year-old Coco Gauff, have cited the success of the Williams sisters as having a direct influence in their decisions to pick up a racket as young girls.

Today, that influence can be measured by the number of African-American women in the top 150: Madison Keys, Sloane Stephens, Gauff, Taylor Townsend, Whitney Osuigwe and Sachia Vickery.

The trickle-down impact of a No. 1

Developing elite talent in sport is a complex process that requires multiple factors – from the talent of players themselves to the support of families, communities, coaches and national sporting bodies – to fall into place.

Although the success of top players is only one part of the equation, it is grounded in a well-known economic concept: the trickle-down theory. When applied to sport, this theory posits that the achievements of the best athletes can trickle down to the grassroots level and motivate more people to take up the sport.

The historical ranking statistics for tennis show a clear trickle-down effect for No. 1 players, especially in nations that have never had or have gone decades without a top player.

Read more: All the racquet: what science tells us about the pros and cons of grunting in tennis

What the statistics can’t tell us is how much the personal character of a world No. 1 impacts the development and growth of young players in her home country.

If we have learned anything about Barty these past two weeks, her game is only part of what makes her unique. Her likeability and the strength of her character in both triumph and defeat also makes her a very marketable star and could serve as another motivational factor for younger players.

Few athletes have likely been as well-positioned to be an enduring inspiration for their country and their sport.

– ref. The No. 1 effect: why Ash Barty’s success could lead to a boom in women’s tennis in Australia – https://theconversation.com/the-no-1-effect-why-ash-bartys-success-could-lead-to-a-boom-in-womens-tennis-in-australia-130866