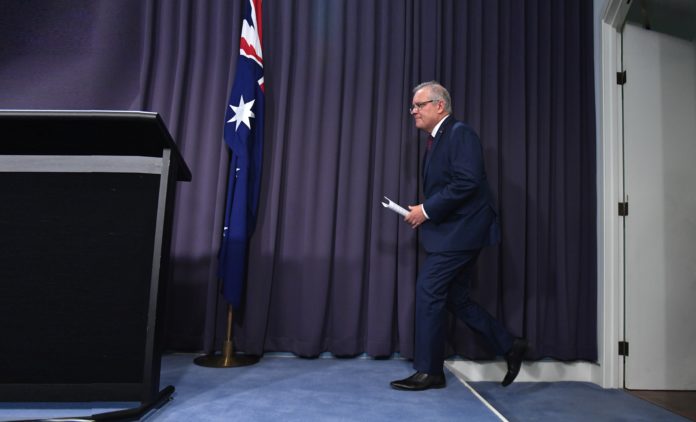 Scott Morrison’s Monday salvo against the NSW environment minister, Matt Kean, one of the Liberal progressives on climate change, was gratuitous and inept.

Quizzed about Kean’s claim that there’s pressure from senior Liberals for strong climate policies, Morrison let fly on the ABC.

The put down came across as arrogant and rude. As for saying “most” of the federal cabinet wouldn’t know who Kean was … really? Given the centrality of energy and environmental issues, and the fact Kean has hardly been low profile, such alleged ignorance is not something to use as a political weapon.

On Nine Morrison said: “I think Matt should focus on hazard reduction and I’ll focus on emissions reduction”.

The attack on Kean – who had cast his remarks on Sky quite respectfully – can do little for relations with a sister Coalition government charged with the major heavy lifting in the state’s fire crisis. (It also fuelled tensions within that government – deputy premier John Barilaro is a critic of Kean.)

It was a flash of the Morrison temper – another example of the Prime Minister having trouble striking the right tone in responding to these devastating events.

In his Monday round of interviews to spruik the government’s announcement of a package for fire-hit small businesses, Morrison seemed to dig in against any change on emissions policy, putting the emphasis on adaptation and response.

Some Liberal sources believe (or hope) this isn’t so much indicating Morrison will do nothing, as showing he wants anything he does to be on his own terms – a reflection of his personality, as well as the debilitating sensitivity of the climate issue within the Liberal party.

No one thinks there’s any chance of the government toughening its emissions reduction target. But it is likely there will be measures over time to try to speed the achievement of the target. (Electric cars will no longer be a threat to the Australian weekend!)

Whether additional measures collectively will be significant or just at the margin is another matter.

Anything extra done on climate policy (as distinct from changes to bushfire response arrangements, such as for mobilising the army) will be, as far as Morrison is concerned, driven substantially by politics.

The prime minister is not galvanised by the importance of the climate issue itself.

For example when pressed on Monday about whether zero net emissions would be achievable by 2050 – widely recognised as imperative in the battle to contain global warming – Morrison’s emphasis was on the downside.

“We undertook to look at that through the Pacific Islands Forum,” he told 3AW:

But what does that mean for jobs? I can’t answer that question right now about what that would mean for jobs. But I’m concerned that it wouldn’t be a good thing and so I think people who make these commitments need to be able to tell people what that will cost them.

Morrison is focusing on unattainable precision. We are talking about three decades on. Decarbonising will create new jobs as well as costing some old ones. Anyway, the jobs outlook so far ahead will be affected by many factors, including some not on the radar now.

Meanwhile, the government is under increasing pressure on its earlier near-religious commitment to a surplus this financial year – a commitment from which it is being forced to retreat from or hedge.

In the pre-Christmas budget update the projected surplus was revised from about $7 billion to $5 billion. Where the budget bottom line will now land is anybody’s guess.

At the PM’s joint news conference on Monday, treasurer Josh Frydenberg acknowledged the cost to the budget this financial year of the fire relief can be expected to be above the $500 million figure the government has been using.

He refused to be pinned down on the status of the projected surplus.

Asked “do you think it’s likely you will deliver a surplus or you won’t?”, Frydenberg said: “Look, I’m not in a position to give a firm answer to that question because the full economic impact is still uncertain”.

On the other side of politics, Anthony Albanese finds himself in an awkward spot by again declining to be specific about Labor’s future climate policy in his Sunday remarks on the subject.

While this has left him open to criticism when the climate debate is intensifying, it is a sensible strategy for the long game.

To spell out detail now would turn the focus sharply onto Labor, when Albanese wants maximum attention on the government.

Elements in this debate can change over the next year and beyond. Although some will believe Labor should be more decisive, it make political sense for Albanese to retain flexibility until closer to the election.

– ref. View from The Hill: Morrison should control that temper in Liberal climate debate – http://theconversation.com/view-from-the-hill-morrison-should-control-that-temper-in-liberal-climate-debate-130227