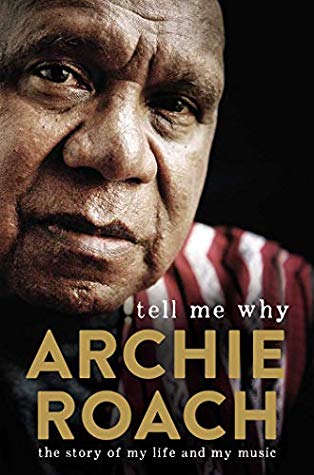 Review: Tell Me Why: The Story of My Life and My Music, by Archie Roach (Simon & Schuster)

Singer songwriter Archie Roach’s new autobiography Tell Me Why, is a grim portrayal of his life of suffering at the hands of 20th century white Australia.

The Australian government eugenics programs against Aboriginal people led to the removal of many thousands of Aboriginal children from their families: the stolen generations. Archie was one of them.

Archie’s many successes in the music industry did not begin until he stopped drinking. Archie sang Took the Children Away at the 1988 Survival Day event in Sydney. Though historian Peter Read had been working on the family tracing and reunion service Link-Up since 1981, it was Archie’s song that brought home the tragedy of the stolen generations for all of us.

Archie sings from the heart about what he knows and what he and his family have experienced. Given how much pain is visible, we can only imagine the rest. Archie’s first album was Charcoal Lane and in 1991 he won the ARIA award for Best New Artist and Best Indigenous Release.

He was born in 1956 at Mooroopna near Shepparton. Aboriginal people had moved there as a direct result of the Cummerangunja Walk Off on 6 February 1939, when around 200 people left a mission in southern New South Wales to protest poor conditions and government control.

However, Archie’s family was from the south and so they moved to Framlingham mission. He and his sisters were stolen from there when he was just four. They were placed in separate foster homes, some very bad, until Archie was placed more permanently with the Cox family. A Scottish family with, it seems, good hearts, they fostered Archie and another Aboriginal boy Noel.

Life was relatively good for Archie. But, when one of his birth sisters wrote to tell him that their mother had died, he and his foster parents discovered the government had lied to them. The Cox family had been told Archie’s family had perished in a fire.

Archie’s choices after this became limited by his inability to trust non-Aboriginal people as well as his deep desire to reconnect with his real family, to learn who he really was. He left the safety and security of his foster parents’ home when he was only 15, never to see them again, and began searching.

Soon, Archie was in Sydney. It was here he met one of the ugliest characters of his life story, Albert, an alcoholic living on the streets. To Albert, the young and impressionable Archie, was prey and a potential drinking buddy. Archie had never had alcohol before he met Albert but he writes that Albert turned him into an alcoholic while he was still only 16.

Archie had been raised by a good white family. For many people from the stolen generations, the notion of being good then becomes synonymous with being white. The Christian teachings in the missions are also about being good. For many Aboriginal people being good then mistakenly becomes antithetical to being Aboriginal.

For many of the stolen generations and later generations who grew up without proper Aboriginal culture, the white trash culture of street living begins to seem the Aboriginal way. While drinking in the streets and pubs of inner Sydney and Melbourne, Archie did find the rest of his family.

Most of Archie’s story is about drinking, the depth and the dangers, the epilepsy, and a drunken suicide attempt. For fellow Aboriginal people of the same era, the extent of this drinking and its effects are not new. Archie writes about the consistent choice to drink and his difficulty stopping.

He doesn’t explicitly write how his choice to keep drinking was a cop-out, but drinkers don’t have to be responsible for anything or anyone. Perhaps this is why Archie writes so little about his children. He didn’t choose his children — for a long time he chose booze.

Ruby Hunter is at the heart of Archie’s life story.

Ruby and Archie met when they were teenagers, they drank together and got sober together. Ruby was the strength behind Archie. She gave birth alone and raised the boys alone until Archie stopped drinking. But although Ruby (who died in 2010, aged 54) is there in Archie’s story, she is also strongly absent in Archie’s memoir. One senses the pain in the absence.

Archie would work for a while but then he would choose the booze again. He loved Ruby, but chose the booze again and again. Archie hasn’t tried to romanticise the drinking culture he was a part of in the book, but perhaps he has in his music. Charcoal Lane, the name of his first album, came from one of the places he used to drink. Can regret be romantic?

I recognise the choices Archie and so many others like him made as we grew up in cities or country towns without strong Aboriginal laws that could tell us how to behave right; while at the same time rejecting white colonial laws as a form of resistance.

It is an empty space, that in-between place, with the added difficulty of acceptance by white trash – the white alcoholics. The term “white trash” explains the ugliness of the colonisation of the Americas and Australia.

Although perceived as classist, researchers argue it’s more about forms of behaviour determined by a lack of knowledge of how to make good choices. Or how to be a good person – to take responsibility for one’s choices, as his experience with the principles of Alcoholics Anonymous later taught Archie.

Song lyrics begin each chapter of Tell Me Why and Took the Children Away, Archie’s first, award-winning song begins his autobiography. In many ways, it is his redemption song.

Archie visited the Framlingham mission, from where he was stolen, while he was drinking; but it was not until he stopped drinking that his Uncle Banjo told him what it was like for them, Archie’s parents, the generation left behind with the silence from the absent children.

This enabled Archie to stop thinking so much about his own pain, and more about the pain of others.

– ref. Tell Me Why review: Archie Roach’s pain is the pain of all of us – http://theconversation.com/tell-me-why-review-archie-roachs-pain-is-the-pain-of-all-of-us-127723