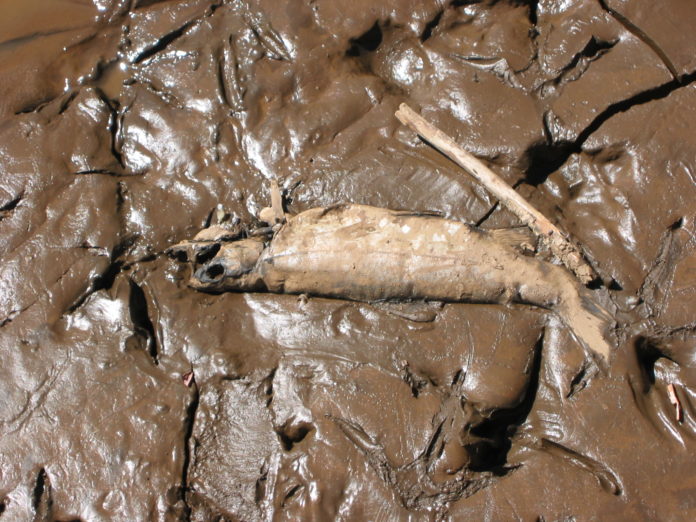 When heavy rainfall eventually extinguishes the flames ravaging south-east Australia, another ecological threat will arise. Sediment, ash and debris washing into our waterways, particularly in the Murray-Darling Basin, may decimate aquatic life.

Fire debris flowing into Murray-Darling Basin will exacerbate the risk of fish and other aquatic life dying en masse in a repeat of the shocking fish kills of last summer.

What will flow into waterways?

Generally, bushfire ash comprises organic carbon and inorganic elements such as nitrogen, phosphorous and metals such as copper, mercury and zinc.

Sediment rushing into waterways can also contain large amounts of soil, since fire has consumed the vegetation that once bound the soil together and prevented erosion.

And carcinogenic chemicals – found in soil and ash in higher amounts following bushfires – can contaminate streams and reservoirs over the first year after the fire.

How they harm aquatic life

Immediately following the bushfires, we expect to see an increase in streamflow when it rains, because burnt soil repels, not absorbs, water.

When vast amounts of carbon are present in a waterway, such as when carbon-loaded sediments and debris wash in, bacteria rapidly consumes the water’s oxygen. The remaining oxygen levels can fall below what most invertebrates and fish can tolerate.

These high sediment loads can also suffocate aquatic animals with a fine layer of silt which coats their gills and other breathing structures.

Habitats are also at risk. When sediment is suspended in the river and light can’t penetrate, suitable fish habitat is diminished. The murkier water also means there’s less opportunity for aquatic plants and algae to photosynthesise (turn sunshine to energy).

Read more: How wildfire smoke affects pets and other animals

What’s more, many of Australia’s waterbugs, the keystone of river food webs, need pools with litter and debris for cover. They rely on slime on the surface of rocks and snags that contain algae, fungi and bacteria for food.

But heavy rain following fire can lead to pools and the spaces between cobbles to fill with silt, causing the waterbugs to starve and lose their homes.

This is bad news for fish too. Any bug-eating fish that manage to avoid dying from a lack of oxygen can be faced with an immediate food shortage.

We saw this in 2003 after the sediment slug penetrated the Ovens River in the north east Murray catchment. Researchers observed dead fish, stressed fish gulping at the water surface and freshwater crayfish walking out of the stream.

Bushfires can increase the amount of nutrients in streams 100 fold. The effects can persist for several years before nutrient levels return to pre-fire conditions.

More nutrients in the water might sound like a good thing, but when there’s too much (especially nitrogen and phosphorous), coupled with warm temperatures, they can lead to excessive growth of blue-green algae. This algae can be toxic to both people and animals and often closes down recreational waters.

Large parts of the upper Murray River catchment above Lake Hume has burnt, risking increases to nutrient loads within the lake and causing blue-green algae blooms which may flow downstream. This can impact communities from Albury all the way to the mouth of the Murray River in South Australia.

Some aquatic species are already teetering on the edge of their preferred temperature as stream temperatures rise from climate change. In places where bushfires have burnt all the way to the stream edge, decimating vegetation that provided shade, there’ll be less resistance to temperature changes, and fewer cold places for aquatic life to hide.

Cooler hide-outs are particularly important for popular angling species such as trout, which are highly sensitive to increased water temperature.

But while we can expect an increase in stream flow from water-repellent burnt soil, we know from previous bushfires that, in the long-term, stream flow will drop.

This is because in the upper catchments, regenerating younger forests use more water than the older forests they replace from evapotranspiration (when plants release water vapour into the surrounding atmosphere, and evaporation from the surrounding land surface).

So what can we do?

We need to act as soon as possible. Understandably, priorities lie in removing the immediate and ongoing bushfire threat. But following that, we must improve sediment and erosion control to prevent debris being washed into water bodies in fire-affected areas.

One of the first things we can do is to restore areas used for bushfire control lines and minimise the movement of soil along access tracks used for bushfire suppression. This can be acheived using sediment barriers and other ersiosion control measures in high risk areas.

It’s also important to introduce strategic water quality monitoring programs that incorporate real-time sensing technology, providing an early warning system for poor water quality. This can help guide the management of our rivers and reservoirs in the years to come.

While our current focus is on putting the fires out, as it should be, it’s important to start thinking about the future and how to protect our waterways. Because inevitably, it will rain again.

– ref. The sweet relief of rain after bushfires threatens disaster for our rivers – http://theconversation.com/the-sweet-relief-of-rain-after-bushfires-threatens-disaster-for-our-rivers-129449