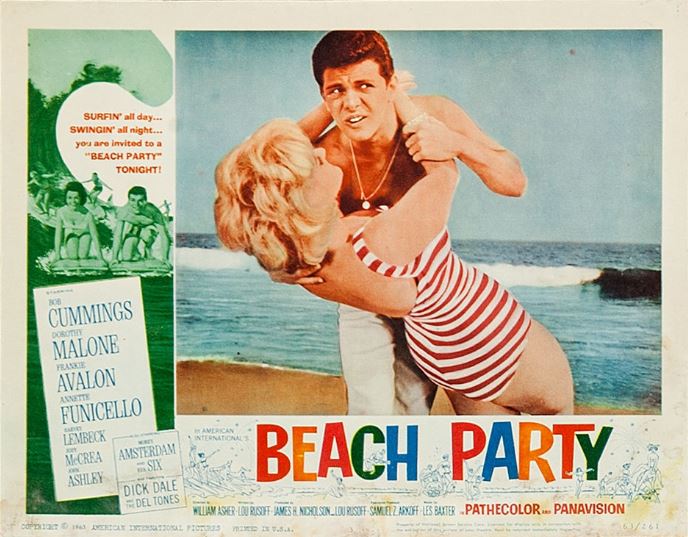 The first tune I ever wrote – a proper tune, with an intro, verses, choruses and a middle bit – was a surfing instrumental.

I have always been a pretty crappy singer, and I figured that the guitar could sing for me (I know, I know). But like anyone who grew up in the 60s this genre made sense to me. It was both fun and familiar, and there was room for storytelling in the sound of the guitar.

Surf music was born with the release of Dick Dale’s first single Let’s Go Trippin’. Dale was born in Boston, but arrived in California as a teenager and started surfing. He played a left-handed guitar, but with the strings upside down, that is with the low strings at the bottom and the high strings at the top. This quite odd arrangement made for an idiosyncratic sound, all the physical movements up-ended; the dynamics reversed, the emphasis offset.

Dale first played Let’s Go Trippin’ in 1960, and it was a wild and crazy sound, the birth of a genre.

The fact that he has a Lebanese background informed his style. The frenetic oud and tarabaki playing that drives Lebanese pop music of the 50s seeped in, along with his love of drummer Gene Krupa’s snappy snare.

It didn’t take long for Dale’s influence to spread. Not really very surfy, but in 1962 Monty Norman’s James Bond theme for Dr. No was played by the tremendous John Barry Seven and is a great example of the foregrounding of the edgy guitar sound that Dale perfected.

The first of the teen surf movies, Beach Party, was released a year later: tales of teen idiocy, with Annette Funicello and Frankie Avalon at the helm, centred around summer, surf, music and endless partying.

At least a dozen of these films were made, formulaic and sanitised, with established comedians like Paul Lynde and Don Rickles, promoting a romanticised image of surf culture.

Although the movies were built on beach party guitar bands, the music charts and radio waves of the time were also home to beautiful, evocative guitar instrumentals. The Ventures from Washington state had their first hit with Walk, Don’t Run in 1960.

They played mostly covers, but developed a new sound – pounding toms and unison picking guitars – releasing many twangy gems including covers of Joe Meek’s Telstar, The Champs’ Tequila, as well as two of the touchstone tracks of the surf music genre in Pipeline and Wipeout.

In the UK, The Shadows were exploring similar terrain, with hits like Apache, Wonderful Land and Atlantis. They took a more lyrical approach, stepping away from the blues-based patterns of the US guitar artists, and sliding in minor chords and more complex structures.

But the thing that really sets The Shadows apart is the sound: the guitar amp producing washes of spacious reverb, as well as the watery bubbling of the vibrato; the guitar tremolo stretching the strings into tonal waves, and the orchestral layering on some of the grander tracks.

Santo and Johnny’s Sleepwalk is a lesson in subtle mood-making with its lap steel guitar evoking the distant Hawaiian islands.

It appears in the repertoire of both The Ventures and The Shadows, inspires another deeply influential beauty, Albatross, by Fleetwood Mac, with Peter Green on guitar, and echoes through the decades to the wonderful work of Richard Hawley.

Australia in the 70s and beyond – great beaches, great surfers, great music

The beaches south of Sydney produced Australia’s most notable surf band in 1961. The Atlantics had their genetic roots in Greece and Eastern Europe, an immigration success story years before Vanda and Young.

Their biggest hit, Bombora, is a surf rock classic and was an international sensation in the earliest days of the genre.

They had another big hit, The Crusher, and then in 1964 released War of The Worlds, awash with echoes and distortion and moodiness. It was innovative and brave, but ultimately spelled their demise as a surf band.

As the 60s hit their twilight, and the wave of political enlightenment from Prague and Paris reached our shores, the blonde, post-war beach party was dragged out by the undertow. The Summer of Love, then Woodstock came and went, leaving the surfing subculture chilling with a joint in the back of the panel van rather than wildly dancing around the bonfire with a bottle of Mateus Rosé.

The twangy instrumentals, with their snappy drums and lightning guitar lines stretched and grew, as synthesizers and production techniques replaced the earlier simple arrangements. The sound changed and became spacious, echoing the endless drift of the waves, and the slow drama of the incoming storm.

In 1970, Morning of the Earth was released, becoming the first film soundtrack to earn a gold record in Australia. It not only has tracks by singer-songwriters and pop stars but also by the acid-surf instrumentalists Tamam Shud. It became an enormously influential film, capturing the idyllic nature of the surfing culture.

But the twang hadn’t gone. The sound of the surf guitar is core to the music of The Cramps and The Pixies. It surfaced in Ricky Wilson’s great guitar lines for The B52s.

It rang clear as a bell in 80s Australian bands like The Sunnyboys, Surfside Six, Radio Birdman, The Riptides, and Mental As Anything.

The Cruel Sea rose in Sydney in 1987 from the ashes of Sekret Sekret, settling around the ebb and flow of guitarist Danny Rumour and guitarist/organist James Cruickshank and the rhythmic undertow of Ken Gormley and Jim Elliot.

More recently Headland, who began in 2014 playing live original instrumentals to gloriously evocative Super 8 footage of big surf at Lennox Head in the 70s, have restored faith in the power of the instrumental for the post millennium. Surf music lives!

I only ever played my little surf instrumental a few times and then that version of our band exploded – Lindy Morrison left to join the Go-Betweens and we entered a more angular and fierce phase. But last year, in a performance at the State Library about Brisbane posters and how they help to tell stories about our past, our culture and our place in the world, I played it again.

It felt odd to be doing it on my own, but it also felt both funny and appropriate. The tune had the twang of a simpler time. As does this little gem from Brian Wilson, who believes that smiles can fix the problems of the world.

– ref. Surf music – in praise of strings, sand and the endless swell – http://theconversation.com/surf-music-in-praise-of-strings-sand-and-the-endless-swell-128914