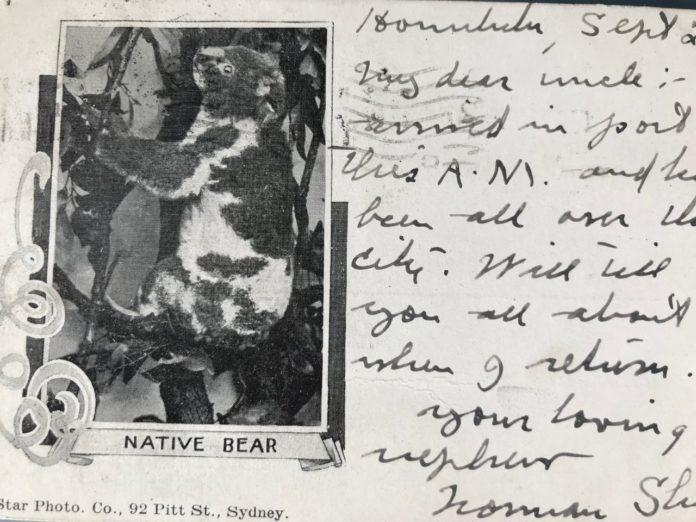 In 1936, The Evening News in Rockhampton wrote:

It seems extraordinary that this animal which is so greatly admired, not only by overseas visitors, but by Australians, is being allowed to suffer extinction.

The preservation of the koala was not talked about so much in environmentalist terms: instead, the koala was seen as a crucial icon of Australian identity and tourism.

The earliest picture postcard featuring a koala I have found was postmarked 1903, and it has been a mainstay of tourism advertising ever since.

In the latest ad from Tourism Australia, the koala has been recruited, once again, to market Australia, starring alongside Kylie Minogue, chilling in a graceful eucalyptus on Sydney Harbour.

But amid Australia’s ongoing bush fire crisis, airing of the digital ad has been “paused”.

Up to 30% of the koala population from the NSW mid-north coast is expected to be lost in the fires, alongside 50% of the koalas on Kangaroo Island – the last remaining wild population not infected by deadly chlamydia.

Eighty four years on from the Evening News’ story, we are still talking about the possible extinction of koalas, our national tourism icon.

The creation of an icon

Koalas were exhibited at Melbourne Zoo from 1861 and at Taronga Zoo from 1914. But at the same time, koalas were hunted ruthlessly for fur throughout much of the 19th century. This practice only came to a halt at the end of the 1920s.

By the 1930s, three koala-themed wildlife parks – the Koala Park in Pennant Hills, Sydney, Lone Pine Koala Park on the Brisbane River and the Adelaide Snake Park and Koala Farm – had opened for business.

Perhaps most famously, it was the star of a Qantas advertising campaign from 1967 to 1992.

The loss of a tourism icon

A 2014 study suggests koala tourism could now be worth as much as A$3.2 billion to the Australian economy and account for up to 30,000 jobs.

In 2020, Australia has 68 zoos and wildlife parks exhibiting just under 900 koalas. A photograph with a koala is a must-have souvenir for many international tourists.

But it is impossible to look at Kylie hanging out with her koala mates without bringing to mind the shocking images of badly burned koalas and other wildlife as the devastating wild fires destroy millions of hectares of bushland habitat.

The plump, relaxed, pampered koalas in the Tourism Australia ad are far removed from the horrific realities of fire. These catastrophic fires have compounded the threatening processes that already affect koala populations: habitat destruction and fragmentation, disease, car accidents and dog attack.

Recent research has shown koalas are also vulnerable to climate change through changes in the nutritional status of eucalyptus leaves, excessively hot temperatures and these canopy-destroying wildfires.

Read more: Koalas are feeling the heat, and we need to make some tough choices to save our furry friends

A life beyond extinction?

Australians have clearly shown they are willing to take action to protect the animal, with the GoFundMe campaign to raise funds for the Port Macquarie Koala Hospital raising almost A$2 million.

The outpouring of emotion and financial support reflects the strong connection that Australians feel for the koala, formed out of the interplay of the animal’s baby-like features and its multitude of representations in popular culture, including, of course, tourism marketing.

Sadly, it is more than likely the koala will go on serving the national interest through its role in tourism even if it was to tragically go extinct in the wild.

Most koala tourism is based on experiences with captive koalas. And extinction hasn’t been a problem elsewhere: Tasmanian Tourism uses a stylised image of the thylacine in its logo.

The long term survival of the koala ultimately rests with governments and their policies on forest clearing, fire management and climate change.

If future tourists to Australia are to experience the koala in the wild, it is imperative that governments act now to strengthen the protection of the species and most crucially, its habitat.

– ref. Koalas are the face of Australian tourism. What now after the fires? – http://theconversation.com/koalas-are-the-face-of-australian-tourism-what-now-after-the-fires-129347