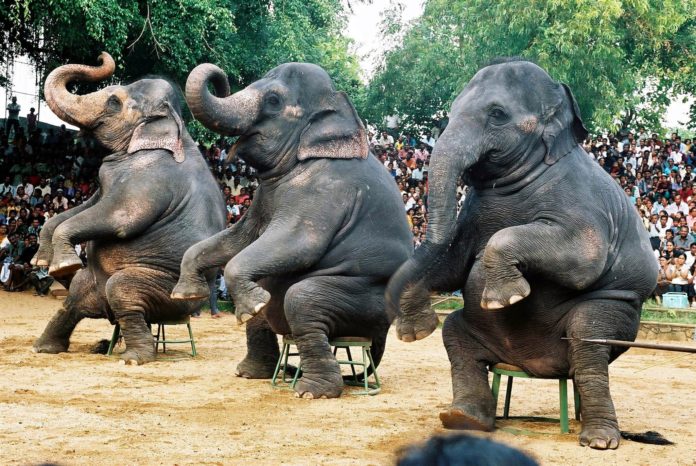 Limbani the chimpanzee has about 650,000 Instagram followers. In recent months the account has featured viral photos and videos of the captive young ape playing the guitar, bouncing on a trampoline and wearing a giant banana costume.

Fans are also offered real-life encounters with the chimp at a Miami facility, paying US$700 for a ten-minute session.

Experts, including renowned primatologist Dr Jane Goodall, have raised concerns about Limbani’s care. They question why he is not in the company of other chimpanzees, and say his exposure to humans could cause stress and other health issues.

Chimpanzees are frequently depicted in greeting cards, advertisements, film, television and internet images. They are often clothed, in human-like poses and settings. These performing animals are usually taken from their mothers as infants, physically disciplined in training, and can spend their retirement in poorly regulated roadside attractions or breeding facilities.

For example the chimpanzee, who appeared with Leonardo DiCaprio in The Wolf of Wall Street has reportedly since been kept in a roadside zoo, dragged around by the neck and forced to perform circus tricks.

Read more: Yes, you can adopt a pet as a Christmas gift – so long as you do it correctly

Primates are complex social animals, and the trauma they suffer when forced to perform is often clear. Research has shown the “cheeky chimp grins” we associate with happiness are actually a sign of fear or submission.

But it’s not just primates who are suffering. Earlier this year US banking giant JPMorgan Chase suspended an advertising campaign featuring captive elephants. The move followed an outcry from conservationists, who explained that elephants are often trained “using harsh and cruel methods” to perform unnatural behaviours and interact directly with people.

Endangered in the wild

Images of wildlife in human-like poses and environments can also skew public perception about their status in the wild.

For example, the International Union for Conservation of Nature classifies chimpazees as endangered. In the last century their numbers have decreased from some 1-2 million to as few as 350,000.

However research has shown that the prevalence of chimpanzees in media and entertainment can lull viewers into believing wild populations are thriving. This undermines both the need and urgency for in-situ conservation.

Participants in both studies said the prevalence of chimpanzees in television, advertisements and movies meant they must not be in jeopardy in the wild.

Images of animals in close proximity with humans also affects their perceived desirability as exotic pets. Such images include “wildlife selfies” shared on social media by tourists, pet collectors and celebrities.

The demand for exotic pets drives the illicit trade in live animals. In Japan, unprecedented demand for otters as pets is likely fuelled by an increase in the visibility of pet otters in social and mass media. The pet trade has been identified as a pressing threat to the survival of otters.

Read more: Is it ethical to keep pets and other animals? It depends on where you keep them

Social media provides an easy way for traffickers and buyers to connect. Over six weeks in 2017 in France, Germany, Russia and the UK, the International Fund for Animal Welfare identified more than 11,000 protected wildlife specimens for sale via more than 5,000 advertisements and posts. They included live otters, tortoises, parrots, owls, primates and big cats.

Social media giants have gone some way to recognising the harmful impact of their wildlife content.

Facebook and Instagram are partners of the Coalition to End Wildlife Trafficking Online which aims to reduce wildlife trafficking online by 80% by 2020. Both platforms also banned the sale of animals in 2017 – however it is not well policed, and the advertisements persist.

In 2017, Instagram encouraged users not to harm plants or animals in pursuit of a selfie, and consider the potential animal abuse behind photo opportunities with exotic animals.

But there are persistent claims these measures aren’t proactive or effective enough.

There is cause for cautious optimism. Researchers and social media platforms are collaborating to develop artificial intelligence to help in wildlife trafficking investigations and facial recognition technology is being used to track individual animals.

Social media users are also key in promoting respect and safety for wildlife. To find out more, you can access resources on “responsible tagging”, “wildlife selfie codes”, ethically sourcing footage, and how to research wildlife attractions.

– ref. Before you hit ‘share’ on that cute animal photo, consider the harm it can cause – http://theconversation.com/before-you-hit-share-on-that-cute-animal-photo-consider-the-harm-it-can-cause-126182