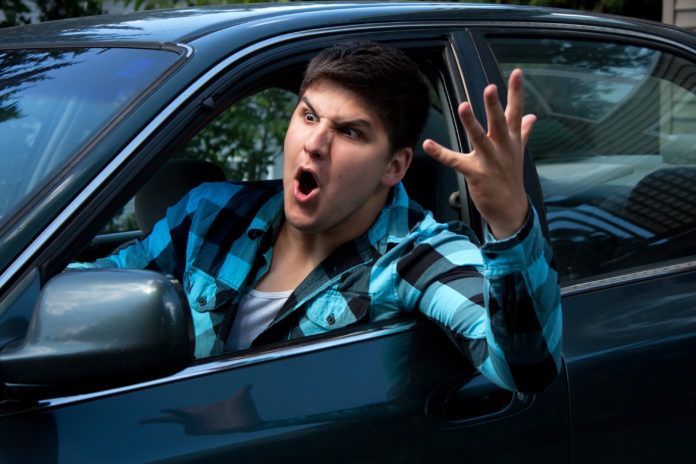 Is it ever OK to swear? Yes. Swearing can be quite acceptable when delivered to drive home a particular point to a specific audience, enhance a comedic presentation, or deal with pain.

I am sure, in that last context, that midwives and partners have heard it all, many times over. And no-one would begrudge the delivering mother that opportunity. But in my experience, the use of profanity is usually gratuitous, repeatedly designed to offend and, to my mind, frequently just a sign of laziness in speech.

In fact, when delivered to an unsuspecting group, especially where children are present, it can amount to a criminal offence.

So what does the law say about letting fly with a few well-chosen expletives?

Public profanity is an offence in every jurisdiction in Australia. The South Australian Summary Offences Act is one good example of this type of prohibition:

But context is everything. Saying “fuck” in front of families at the local sports ground would likely lead to a fine if someone complained to the local police. But the same words used by a comedian at a performance for paying patrons later that night will incur no such sanctioning.

Anyone who has regularly attended live theatre in the past decade, or who watches late night television or listens to late night radio, would know that, over the years, the use of profane language has become widespread.

Read more: The ‘c-word’ may be the last swearing taboo, but doesn’t shock like it used to

Indeed, language is forever evolving. Words that used to be uttered sparingly are now deployed in media conversations as a matter of course. They’re subject to “language warnings” informed by the various radio and television codes of conduct, with television codes being particularly cognisant of the likelihood of children viewers.

Any modern history of the law of profanity in Australia must begin with the story of Alex Buzo’s 1968 play, “Norm and Ahmed”, which was destined to be seen only by adult audiences.

Read more: Foul-mouthed Minions? Some myths about children and swearing

In the play, Buzo presents racial prejudice as profoundly irrational in the behaviour of ordinary Australians. The play script originally ended with the line “fuckin’ boong”. For its debut production in 1968, “fuckin’” became “bloody”. But the following year in Brisbane, Buzo’s original line was used.

After one performance, Norman Staines, the actor who said the line, was arrested. But it was not the use of the dreadful racial slur that had attracted the attention of the two police who mounted the stage, but rather the use of the word “fuckin’”.

The magistrate’s conviction of Staines was later overturned by the Supreme Court of Queensland on the grounds the word was not obscene in the context of the play. The High Court later agreed.

There is little doubt the judgements of these courts set a precedent. Swearing was now acceptable if employed in the context of adult entertainment.

There are some interesting socio-legal writings on this subject, too. Criminologist Paul Wilson discovered in the New South Wales outback town of Moree in the late 1970s that the police were using the word “fuck” liberally in their banter with each other, while regularly arresting Aboriginal men in the street for using the same word on the basis it was “offensive”.

Wilson concluded from his research experience that rule-makers are often the most flagrant rule-breakers.

What’s more, practising criminal lawyers know police regularly use the offensive language law to give them the widest possible range of excuses to arrest someone giving them grief.

It’s difficult to say how many people today around Australia are charged with using offensive, profane or insulting language in any one year, but you could safely surmise it’s in the thousands.

What we can say from evidence in NSW is that Indigenous people, who comprise 3% of the population, make up approximately one-third of those charged and taken to court on account of their use of language deemed by police to be offensive.

Read more: FactCheck Q&A: are Indigenous Australians the most incarcerated people on Earth?

More recently, in 2015, a political activist wore a sandwich board sign that linked former Prime Minister Tony Abbott with the “c” word. The activist was arrested and charged with offensive conduct.

The matter then wound its way through the courts. Two years later, magistrate Jacqueline Milledge concluded the law was concerned with what would offend the “hypothetical reasonable person”, saying:

It’s not someone who is thin-skinned, who is easily offended […] It’s someone who can ride out some of the crudities of life. [The sign is] provocative and cheeky but it is not offensive.

So where does all of this leave us? Can we use profanities? Yes, of course, but one should choose one’s audience carefully, lest the long arm of the law take an interest in our public utterances.

– ref. Swearing in public is still illegal, but you probably won’t be charged if you’re white – http://theconversation.com/swearing-in-public-is-still-illegal-but-you-probably-wont-be-charged-if-youre-white-127512