ITEM ONE: New Zealand’s reputation as an honest broker on the world stage is again being questioned here, after revelations that the Government’s signals spies have passed intelligence over to Bangladesh’s counter-terror squads, forces that are themselves under investigation for torture, summary executions, and other crimes against humanity. The latest report in the investigative series, the Snowden Revelations, has detailed how New Zealand’s signals surveillance spy agency the GCSB has for over a decade targeted Bangladesh’s communications. The revelations are backed by official documents acquired by US intelligence whistleblower, Edward Snowden. The spying has been part of the Five Eyes intelligence alliance’s counter-terrorism operations. New Zealand’s GCSB has been tasked, since 2004, to acquire all cellphone communications of the entire Bangladesh population. It does this through a full-take manoeuvre using technology provided by the USA’s National Security Agency, the NSA. The data acquired is packaged, sniffed or sifted, analysed and made available to intelligence analysts working for Five Eyes agencies attached to the government’s of the United States, Britain, Canada, Australia, and New Zealand. The New Zealand Herald reported Thursday that the intelligence gathered by New Zealand’s GCSB has also been forwarded to Bangladesh’s state intelligence agency and its notorious Rapid Action Battalion (RAP) – organisations that have carried out summary executions, torture, and according to Human Rights organisations, operate with a disregard for international law. They are currently under investigation by the International Criminal Court. The twist to this tale is a classic sting. New Zealand’s GCSB also targets the communications of Bangladesh’s authorities including those accused of the above mentioned crimes. The Prime Minister John Key refused to elaborate on the revelations, and would neither confirm nor deny the claims. He refused to respond to accusations that New Zealand has become complicit in Bangladesh’s crimes against its own people through sharing intelligence with the regime, information that identifies people who oppose the Bangladesh government. ITEM TWO: New Zealand’s version of The Batchelor programme is not going well. The hapless Batchelor, Arthur Green, has on three occasions offered a rose to one of his supposed admirers, only to have them refuse his offerings. On the first week of the programme, bachelorette Rosie preferred to leave the show rather than accept a rose from poor ole Art. Then, Danielle L gave Art his rose back, saying to continue would have been “disingenuous” as she didn’t think they would find love. The latest was this week, when Auckland criminal lawyer Danielle B opted not to receive a rose from Art, citing a lack of chemistry between the pair. While looking a bit desperate, Art has shrugged off the rejections and is preparing for another week of ‘romancing’. New Zealand Report broadcasts live on Fridays on FiveAA.com.au and webcasts on EveningReport.nz. –]]> 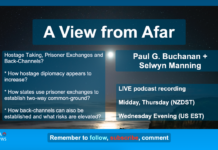