Analysis by Keith Rankin – This article was also published on TheDailyBlog.co.nz.

Chris Trotter, in his interesting May 14 reflection on The Virtues of Inflation, notes the benefits of inflation to debtors, and its costs to creditors. Inflation is one of those ‘use it or lose it’ mechanisms through which hoarders of financial assets may be disabused. The problem with inflation, however, is that when it is a mechanism to get society out from the economic custard, inflation is notoriously difficult to induce.

It’s not a good idea to mention the virtues of inflation and the legendary German inflation of 1923 in the one article. The fanatically anti-inflation creditor lobby always like to wheel out this as an historical example of what could happen, even in New Zealand, if we get a bit loose in our monetary habits. And they overstate its importance in German history. The deflation of the Great Depression (resulting from what we now call austerity, fiscal consolidation or internal devaluation) was far more significant in bringing the Nazis to power than was the Weimar hyperinflation. Further, the causes of that hyperinflationary event were very much rooted in the post-WW1 financial environment.

Those who lent or otherwise hoarded all of their unspent Papiermarks – Germany’s currency from 1914 to 1924 – may have been “wiped out”, though many of the German middle class had substantial foreign exchange and property assets. This was a period of floating exchange rates when anyone could buy or sell foreign currencies, and hardly anybody had a clue as to what were or were not appropriate exchange rates. A military occupation of Germany’s Ruhr industrial heartland by the post‑Versailles creditor French government led to a workers’ strike. So yes, much money was chasing few goods, and the foreign exchange speculators pounced. The Papiermark became worthless. Nevertheless, by the late 1920s, underpinned by a new currency and the American Dawes Plan, there was a substantial economic resurgence and a surprisingly prosperous middle class in Germany. It was this middle class that supported the Brüning government’s disastrous deflationary fiscal policies from 1930 to 1932.

Inflation is not, as Milton Friedman claimed, “always and everywhere a monetary phenomenon” that can potentially lead to hyperinflation. Friedman attempted to define “inflation” as a continuous monetary process of rising prices, thereby making his proposition a truism. In individual countries inflation indeed can be a monetary phenomenon. Monetary inflations take place when there are two types of money, and only one type is believed to hold true value; commonplace in South America in the late twentieth century. In the post-WW1 world, the $US was the accepted measure of true value, as it is in 2015. Monetary inflations represented the sustained depreciation of a country’s currency. That was what happened in Germany in 1923, in association with the Ruhr occupation.

This global inflation was not a monetary event. It was not initiated by some politicians or central banks deciding it would be a good idea to run loose monetary policies. Monetary expansion was an accommodating process, never autonomous.

The first was a ‘demand-pull’ event, in which spending (‘aggregate demand’) outstripped global economic capacity. An important part of the event was the US government spending associated with the Vietnam War, and with the Cold War more generally (including the space programme which can be understood as part of the Cold War). The other component was the ‘class war’, in which in the later 1960s the working classes were starting to ‘win’. The inflationary problem was that the capitalist class was unable to be vanquished. Capital was able to respond by raising prices, because in these high‑spending times there was no competitive resistance to raising prices. (To classical monetarists, the Federal Reserve Bank should have engineered a monetary deflation to offset this ‘demand-pull’ global effect.)

In New Zealand this wage effect was largely a result of wages being held to the rate of inflation for a decade and a half of economic growth (1953-67), followed by an attempt by the Arbitration Court to deny a wage increase in 1968, a year when inflation hit five percent. As a result the wage-indexing system collapsed and an era of free-wage bargaining began just as international inflationary pressures were rising. Further, equal pay for women in 1972 initially pushed up labour costs; these costs were easily recovered in 1973 and 1974.

In late 1973, the world oil price shocks began, again in part because, prior to then, oil prices had been much lower than they would have been in a well-functioning market. The 1974 oil price hikes ushered in – rather than caused – a period of global cost-plus inflation from 1974 to 1982. With a second set of exogenous events hitting the world economy before the first set of disturbances had settled, it looked to many as if the whole shebang was a single event. This opportunity was exploited mercilessly by the Friedmanites. The political case for monetarist policies was premised on the failure of Keynesian‑informed policies to sufficiently quickly arrest the prior round of inflation; inflation that probably would have settled soon enough on its own accord.

This next period of inflation – cost-push inflation – came to be known by the unlovely name of ‘stagflation’. The stagflation was substantially aggravated by the high cost interest rate policies that were imposed in the name of inflation fighting. While these policies brought much money into the financial sector, the new combative environment brought further requirements for business services: advertising, good accountants and lawyers. The financial and business services sectors – a cost to everyone else just as wages are a cost – became the new lords of the marketplace.

To understand cost-push inflation, one important metaphor is that of low-hanging fruit. Cost inflation happens when the low hanging fruit of cheap oil and easily-farmed land give way to the next less accessible tier. If, in addition, substantial new financial costs are present and increasing, then a new kind of double-digit inflation (nothing like hyperinflation) takes place. Monetarists believe that their taut alchemy can offset such rising costs, thereby making it look as if costs are not rising. But their methods were to raise interest rates, adding directly to debt-servicing costs, and adding substantially to the opportunity costs of running businesses and rewarding shareholders.

Offsetting these higher costs, however, was the global recession (1980-82) created by these policies. Indeed monetarism works, in a manner of speaking, by creating conditions in which workers must compete aggressively with each other, thereby reducing labour costs. In the early 1970s labour was winning the class war. Politicians like Richard Nixon and Robert Muldoon supported the high-wage but not too high-wage economy. The monetarists despised these men deeply. By the mid-1980s the brutal fightback of ‘capital’ had clearly been successful. (There had been some resistance in Australia, facilitated by Bob Hawke, but little elsewhere.) The very inflation that had persevered because of these policies was used as the reason for them.

The Great Inflation in New Zealand had one last gasp, in 1985. Inflation rates accelerated markedly after, early in 1985, Roger Douglas deregulated the financial markets and imposed a super-high interest rate monetary policy. As late as November 1984, months after Muldoon’s defeat, forecasts of post-freeze inflation remained quite modest. (There had been a wage-price freeze from mid-1982 to early 1984.) The massive cost increases associated with the explosive growth of finance and business services created a surge of domestic inflation. The tradable sector of the New Zealand economy was walloped. Douglas was happy to give the public sector an initial boost, knowing that he could blame any inflation that took place on the post-price‑freeze environment. (There was a later surge in domestic inflation in 1987 that was mostly, but by no means only, due to the imposition of Goods and Services Tax.) Rising exchange rates – from an artificial low arising from the July 1984 devaluation – substantially offset the huge domestic inflation that Douglas’ policies wrought.

Later that decade, inflation quiesced as unemployment soared; the inevitable consequence of a monetarist putsch. The 1989 Reserve Bank Act probably had no effect whatsoever on inflation. The Great Inflation, including its New Zealand mid-1980s Indian summer, was already over. The policies that it justified in turn created the 1990s’ Great Inequality. Further, the generation born between 1935 and 1950 benefitted most from both the inflation itself and the policies committed in its name.

The key to a benign debt-rebalancing environment today is not unachievable inflation, but is a phenomenon historically associated with inflation; namely, negative real interest rates. As we had before the monetarist putsches of the 1970s and 1980s, we have negative real interest rates in parts of the capitalist world today. Further, the zero interest rate environment ushered in by central banks today (as a pro-inflationary policy) actually is furthering a deflationary competitive environment, with falling financial costs adding to the deflationary soup.

The Great Inflation of the 1970s remains an enigma of world economic history. The central bankers and Treasury economists don’t really have a clue about what really happened then. They are equally clueless about what’s coming. 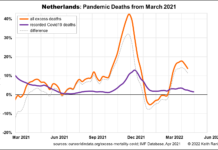